RSVP: Community Conversation: Love In The Time of Fentanyl

In partnership with Metro Cinema and Lost Time media, I'm excited to announce our follow-up screening and public education event, "Love in the Time of Fentanyl" (Thursday, February 16th). This event will include an naloxone training, harm-reduction reception, film screening, and presentations from medical and public health experts. Convened by Ward papastew City Councillor Michael Janz, in partnership with many others including ATU 569, University of Alberta Sustainability Council, Climate Justice Edmonton, Migrante, and the Parkland Institute.

Get on Board: Public transit is a critical component of transportation mode shift and greenhouse gas emission reduction targets set out in The City Plan. The City Plan envisions a vibrant and prosperous city with an integrated transportation network, providing residents with convenient and equitable options. A robust transit system is foundational, including an evolved mass transit network that supports mobility and connects all areas of the city.

There have been major changes over the past year to public transit. As a city, are we on track to meet our City Plan goals?

You are invited to be a part of an invite-only community conversation about advocating for better public transit in Edmonton. You will be joining employers, business leaders, academics, community advocates, seniors, parents, students, and a cross-section of the Edmonton Community.

We expect that these learnings will be an opportunity to learn, connect, and advocate with other public transit users, and be an ambassador and advocate in your community, your workplace, and around your kitchen table. Our goal is to get organized and build a transit movement for all riders! 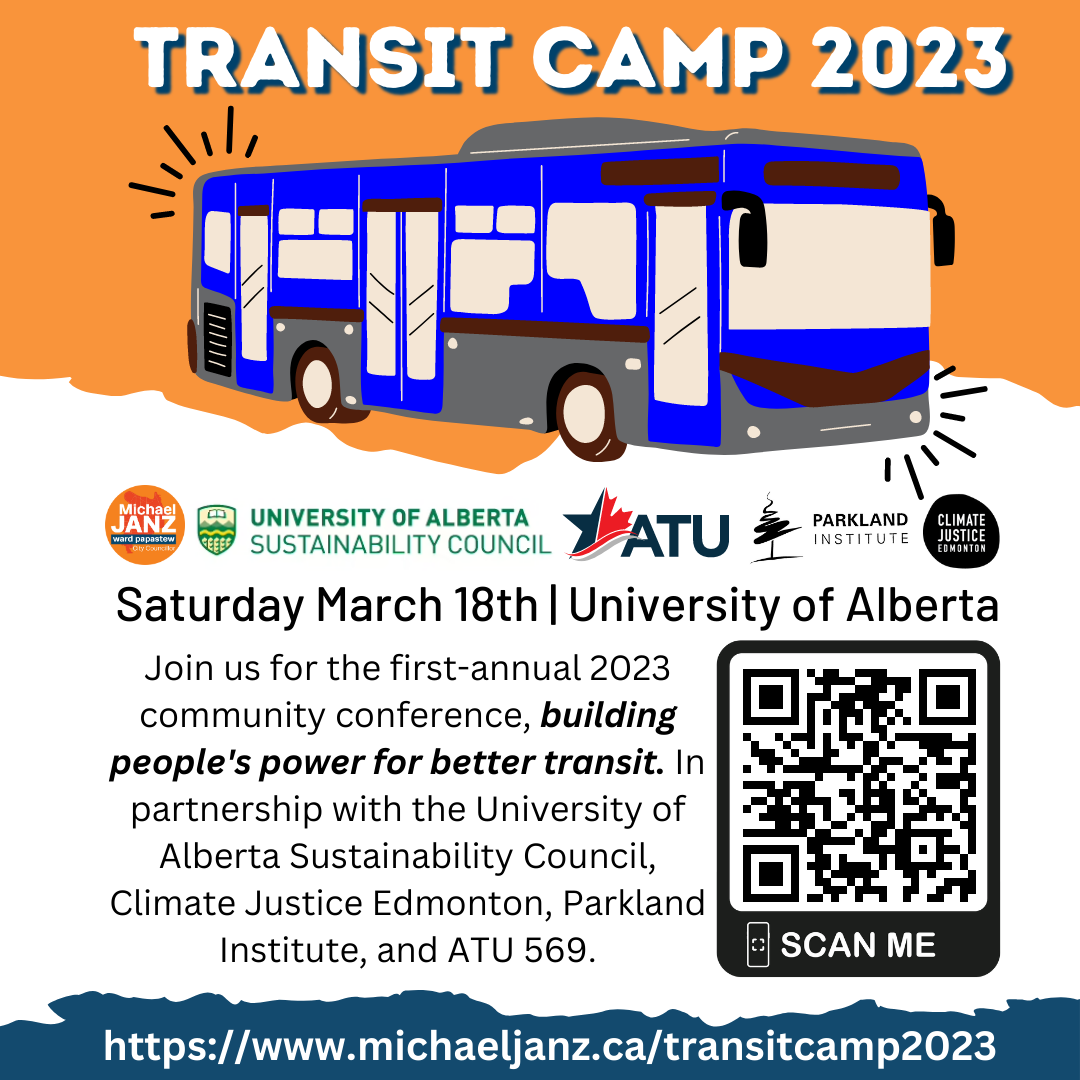 ACTION: Snow removal update: Thank you for your messages identifying particularly problematic roadways. I've actioned your concerns to the department head and I receive this message on Friday. If you have not signed up for text and email alerts, please do so. My family has one set for our home but also our work places which is very helpful. I really appreciate the multiple location feature.

Residential road maintenance grooming will be initiated next week. We will call a Phase 2 parking ban and proceed with grooming residential roads and alleyways to smooth out the surfaces and remove any major ruts. When dates are confirmed, there will be detailed information provided through the typical channels including a media availability, social media and citywide public service announcements. Crews are currently finishing up school zone windrow pickups (among other tasks). We encourage Edmontonians to sign up for text and email alerts at edmonton.ca/safetravels.

The Community Sandbox Program review is underway to help determine options to implement a more effective and cost efficient program. Residents and stakeholders will be invited to provide feedback through an online survey (February 6 - March 7), online tools and in person events. A report with recommendations will be provided to Council, with implementation of any changes anticipated at the start of the 2023-24 winter season. Please see the enclosed update with information about the many programs and services our teams are delivering.

READ: Keith Gerein: Province targets potentially key tool in Edmonton's housing arsenal. "The province’s decision to erase this option feels particularly frustrating given the UCP government’s general invisibility on homelessness, its lack of a credible plan on affordable housing and its varied moves to squeeze municipal finances. It is another example of the province attacking the autonomy of cities, treating them like wayward children incapable of managing their own affairs. For a premier who complains bitterly about Ottawa’s disrespect to Alberta, this seems especially hypocritical. While the province has a fair desire to protect housing affordability, it shouldn’t come at the expense of housing availability for those in dire need." https://edmontonjournal.com/opinion/columnists/keith-gerein-province-removes-a-potentially-key-tool-from-edmontons-housing-arsenal

READ: Confidential Coke Sponsorship: City Council signed a sponsorship agreement with a national beverage sponsor (Coca-Cola) but I’m not allowed to tell you very much about it. But I can recommend to you this article https://urbanaffairs.ca/edmonton-ish/have-a-coke-and-a-smile-because-thats-the-deal/

The City later made this statement about the deal: “While the details of the recent sponsorship agreement with Coca-Cola are private, we continue to explore many opportunities for local businesses to support food services at City facilities into the future.”

When asked about why he voted against the deal, Janz was understandably cautious about what he could say. He said that he hoped that there would be an opportunity down the road for local beverage makers and bottlers to provide their products to city venues, even if they were in small kiosks. He encouraged Edmontonians to support local businesses, so these beverage makers could build their capacity so they could, down the road, have enough product that could serve a larger scale event.

But in September of 2022, Janz took to social media to discuss how the Coke deal impacted local beverage makers. Back then, he wrote: “I’m passionate about shopping local, living local, and using our purchasing power to build real wealth in our community. Each bill we pay and dollar we spend has an impact. Edmonton’s economic recovery is an opportunity to build on our existing economic strengths and invest in our future. With the right tools and approaches, we can continue to ensure a high quality of life and low cost of living that makes Edmonton a great place to live and start or grow a business.”

READ: Municipal Lobbyist Registry: I'm pleased to share I've been working with the Mayor and councillors on the next steps to create a municipal lobbyist registry. There were a few positive news stories this week quoting many who were supportive of the creation of a municipal lobbyist registry for City Council AND city administration, comparable to what is in place at the Provincial or Federal Government. I've heard positive feedback from the business community as well as some members of administation who believe this could afford them a level of protection. “Right now, the city has no lobbyist registry, so we have no idea who is meeting with council and administration and what their meetings are regarding,” he told Postmedia. “(We don’t) have the same level of transparency for industry or industry groups that exists with the provincial or federal government, and that is to the detriment of all players. Business owners want to know they’re being treated fairly.” https://edmontonjournal.com/news/local-news/janz-calls-for-lobbyist-registry-in-wake-of-untendered-26-5m-pedway-contract

WATCH: Going wild for dog parks! There were a number of media stories about municipal dog parks, but this one which was shot in our own Braithwaite Dog Park was my favourite. The cameraperson was playing chase with the dogs and oh boy was everyone excited! Just a reminder thanks to the leadership of City Council and Administration, up to 30 new pop up dog park pilots will be coming online this year. As you likely read last week in my Seven Projects I'm excited for in 2023, the Pleasantview dog park is going to be and incredible asset to our ward and central Edmonton! https://edmonton.ctvnews.ca/pop-up-dog-parks-coming-to-edmonton-this-spring-1.6235153

Clean Coal? I've talked about the Youtube Channel Climate Town before, but I really have to recommend their new video on Clean Coal.

It was illuminating, especially in light of mass electrification of our systems, the interest in Carbon Capture in Alberta, our booming renewable industry and the "Protect our Parks" movement.

Banning Gas Moves? I was interested to see Gas Stoves were back in the news. There's a big push to ban them, not only because of their carbon footprint, but because of their negative impact on your respiratory health. From Bloomberg news: "The science is overwhelmingly clear: Gas stoves are a source of air pollution located inside your home. They can emit climate pollution, as well as pollution linked to asthma and other health problems. They can release pollution when turned on, and even when they’re off. In some cases, the exposure to pollution is low; in others, the exposure rivals what can occur outside, such as from traffic on busy intersections and highways."  And yes, Climate Town already had a video about Gas Stoves:

Alcohol and Cancer? Is it time to put Cancer warning labels on Alcohol? This CBC article was the talk of my friends and family. Is the research going to change your practices? CBC: https://www.cbc.ca/news/health/alcohol-cancer-risk-warning-1.6715769

Again, if you are interested in Alcohol and Public Policy I highly recommend you check out the book "Drinking Up the Revolution" by James Wilt. "Many people are drinking more now than ever before, as already massive multinationals are consolidating and new online delivery services are booming in an increasingly deregulated market. At the same time, public health experts are sounding the alarm about the catastrophic health and social impacts of rising alcohol use, with over three million people dying ever year due to alcohol-related harms." James will be a keynote speaker at Transit Camp 2023, and we are working on a local pub crawl/book talk opportunity following the event. Again, sign up at www.michaeljanz.ca/transitcamp2023 to join us!

Basement Gardens? I think we can all agree we need to eat more vegetables, so I was very intrigued to see an Edmonton couple turn basement into an underground garden. https://edmonton.ctvnews.ca/edmonton-couple-turn-basement-into-an-underground-garden-1.6236688

Thank you for reading and I'll see you next week!